I didn't plan on attending Cleve's auction in person this week.  There wasn't a whole lot of stuff that held my interest, and the weather was cold and the Lovely Wife had come up with wonderful new soup recipe that I was anxious to try.

But, I had it in my mind that I needed to put up one final auction post, and needed to be there and give you a better idea of what Cleve's, and his auctions are like.  That's how much I care about you folks! 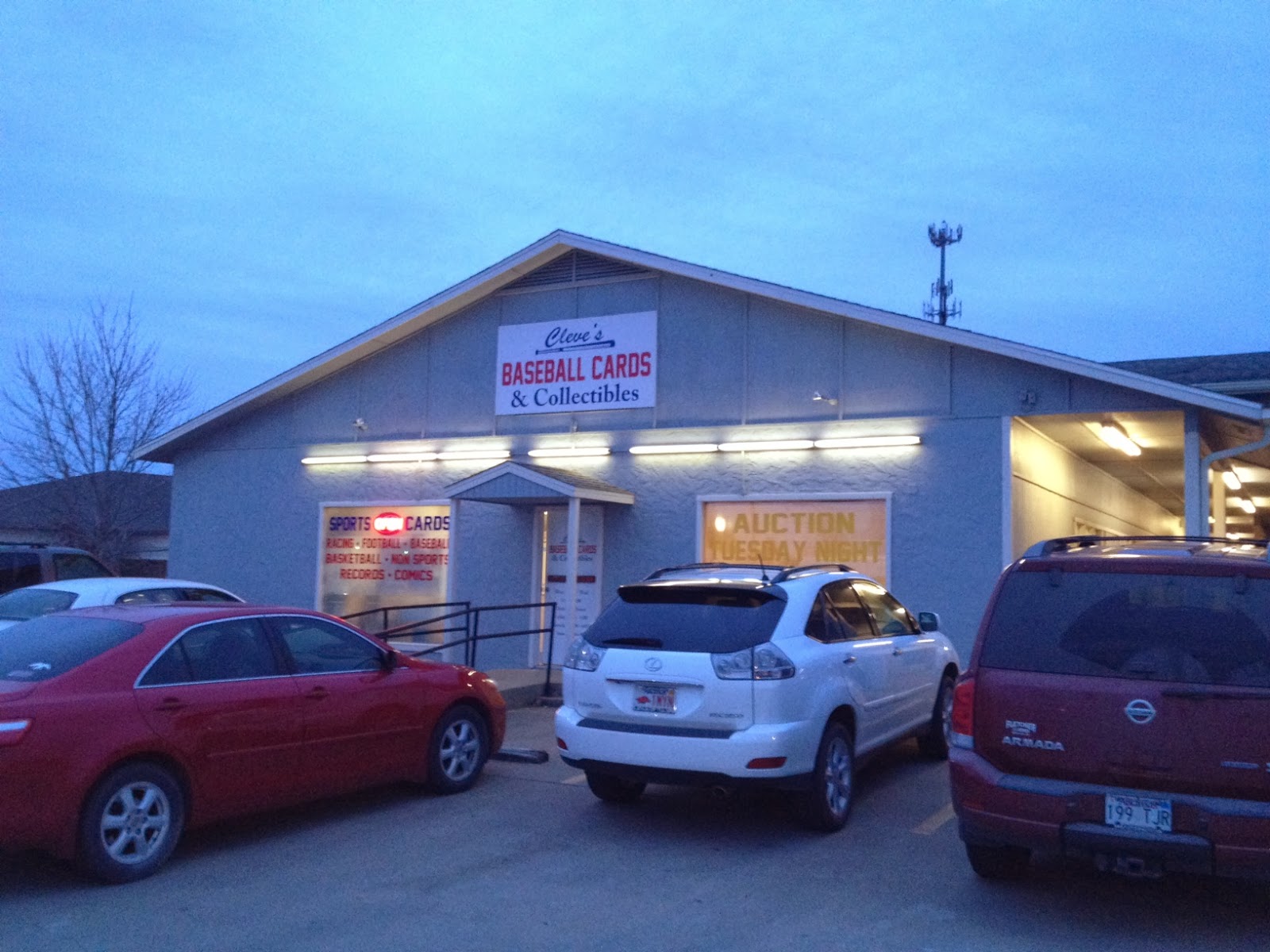 A while back, Cleve's underwent a bit of a remodeling project.  He put up all new signage, and a big notice in the front window advertising the weekly Tuesday night auction.  The signage and the store look great! 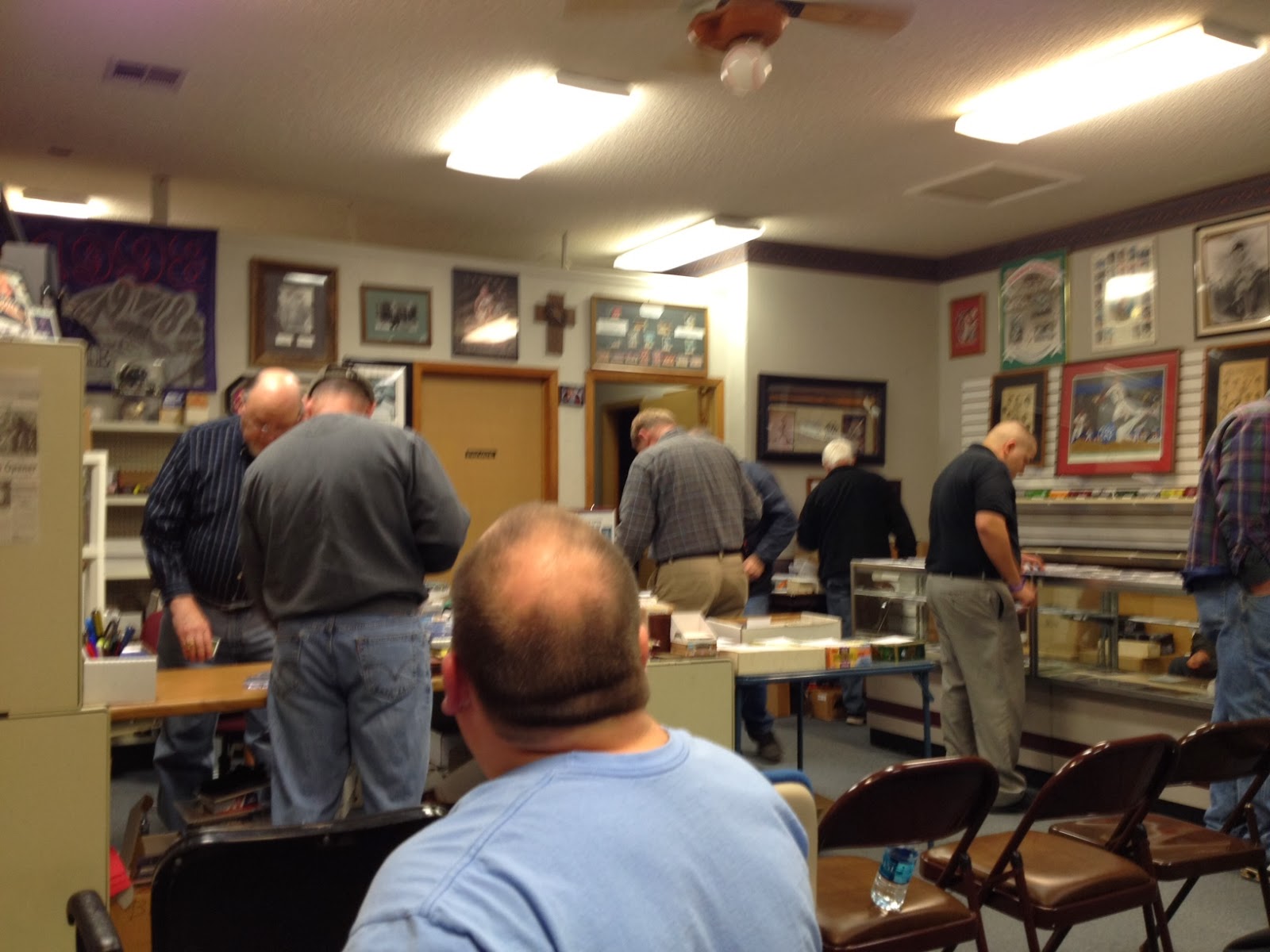 The crowd tonight was smaller than normal, but still decent, with about 20 people showing up.  There's Cleve facing us on the left.

Basically there are a couple of areas to browse before the bidding starts- the glass cases and the "goodie" table. 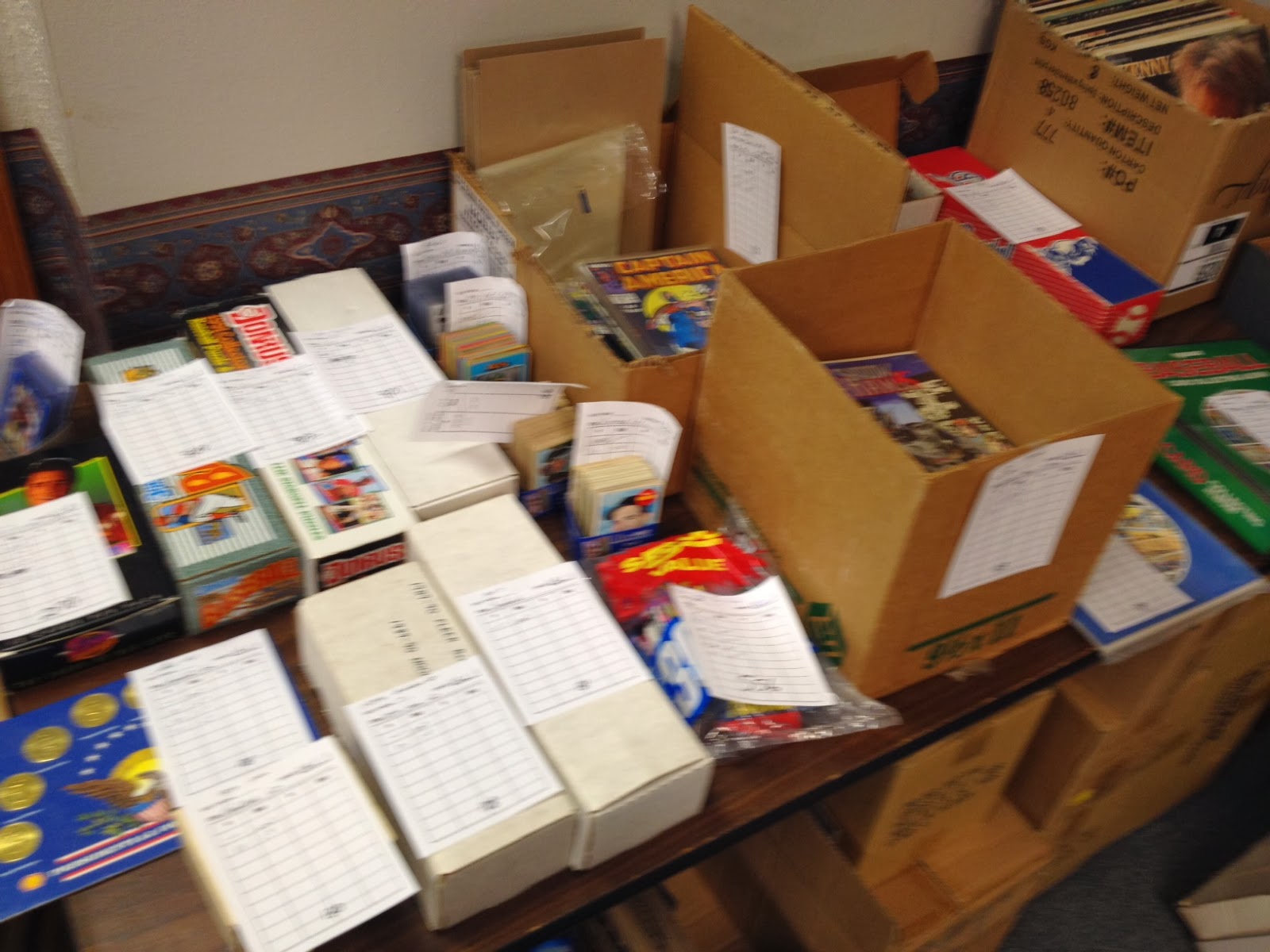 Usually, this goodie table contains complete sets, misc boxes and a few non-card related items.  This week, there were about 10 different junk wax era complete sets available, some binders with misc. cards, a couple of boxes of comic books, and a box of LPs (on the far right).

Cleve usually starts the auction off with the goodie boxes, and then moves to the single cards.  In between, he holds a weekly drawing for a $25 credit.  It's just for the people that show up in person for the auction, which I why I've never won it.  I usually just submit write in bids since my work schedule and family duties prohibit me from attending much. 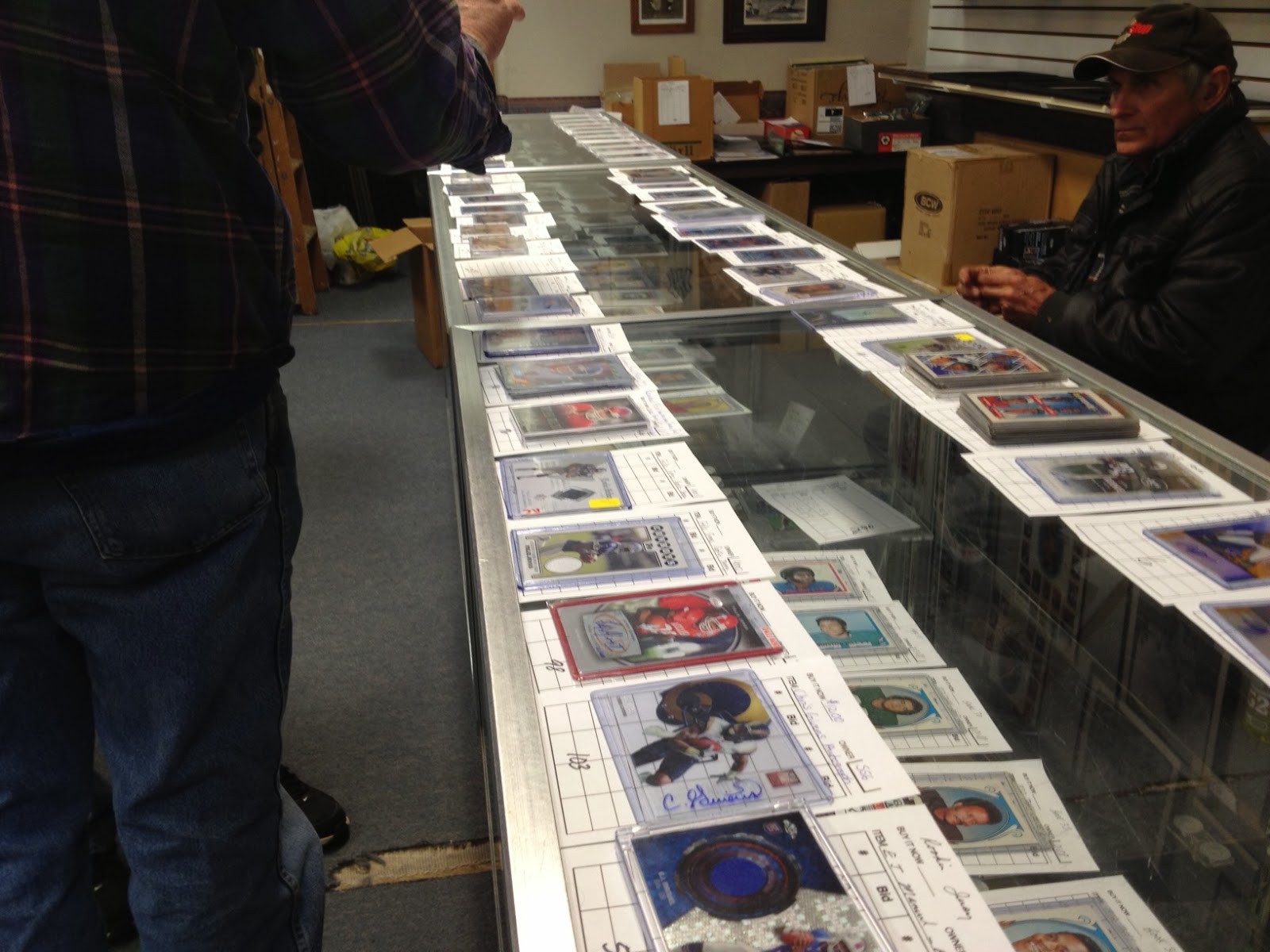 I have never once seen that dude behind the counter smile, and I've only heard him speak a couple of times. 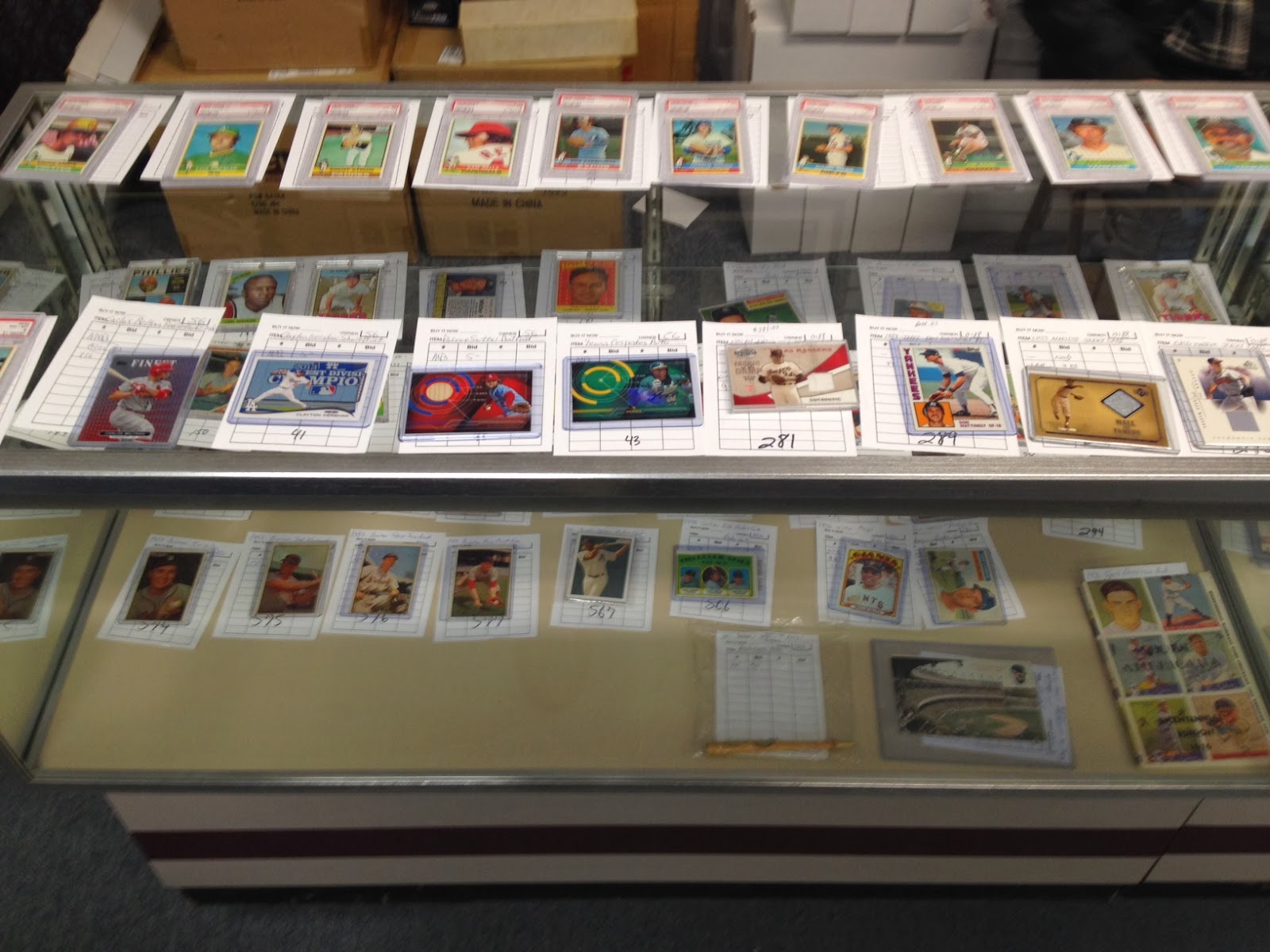 Typically, there are about 250 auction items a week.  This week was bigger than normal at around 350.  But again, not much of it did I want.

I managed to pick up a few things though: 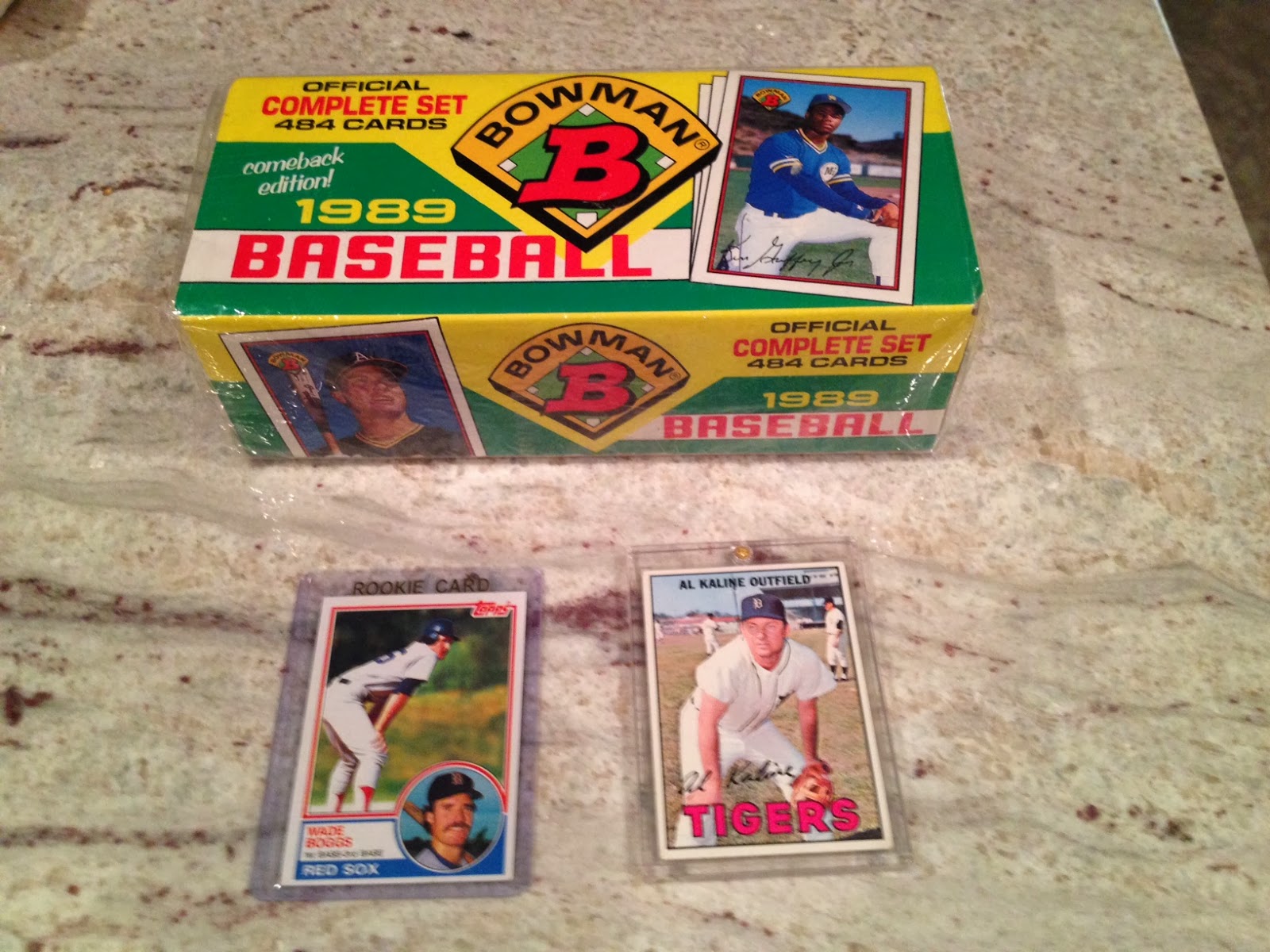 I hope everyone has enjoyed my frequent Cleve auction posts.  I'd say these auction were good for about 20% of my blog subject matter. I'll probably still show some cards on twitter from time to time.
Posted by Napkin Doon at 6:00 AM
Email ThisBlogThis!Share to TwitterShare to FacebookShare to Pinterest
Labels: Al Kaline, Cleve's Auctions, Wade Boggs

Play at the Plate said...

I always liked the Cleve update.

It's awesome to see the behind-the-scenes at Cleve's. Looks like I would expect it to.

Thanks for the photo experience. I love your Cleve's posts. I only had something like that around me.

I sometimes get jealous but I love seeing the great stuff you come up with.