Several weeks ago, I showed off some cards of Parker Bridwell, a pitching prospect in the Orioles organization.  I am familiar with Parker's hometown of Hereford, Texas and mentioned that I knew a cousin of his from High School.  I received a comment on that post from a lady named Becky Bridwell, asking which cousin of his I knew.

Turns out Becky is Parker's Mom!  We corresponded privately a few times (also, turns the person I know is his aunt, not his cousin) and Becky was gracious enough to answer a few questions for the blog.  I have tons of questions about what it's like being a professional baseball player, and I also thought it would be interesting to get a parent's perspective on it.   I think you'll agree that Becky's responses are fantastic!:

When did you know that Parker was a special athlete?  Probably not until  I had to move my lawn chair away from the other moms at little league and start keeping a score book of my own just to occupy myself and keep from listening to them criticize him for “throwing the ball too hard”, or saying that “someone is going to get hurt if he doesn’t stop pitching it so fast”.  That’s when it probably hit me that he was a little different.    To the point where he could make a career in sports?  I didn’t realize that until his senior year of high school when we played a baseball game in Lubbock in freezing drizzle and snow and about 15 professional scouts showed up with radar guns and stood in the stands in the horrible weather watching him pitch.  That made it real for me.  I’ll never forget that.

Are you able to go to many of his games during the season?  How do you keep up with him?  We try to make at least 4 or 5 of his games every season and to spring training.  The ones we don’t get to make in person, we listen to online.  If we’re lucky, he’ll play in a minor league ballpark that broadcasts online video and we can watch it on milb.com.

Parker now has several baseball cards available.  Are you into that stuff at all, or do you own any of his cards?  Does he care anything about it?  Parker’s dad and I are both into it—it’s cool to see our kid on a baseball card.  We watch ebay and purchase any new ones that we can.  Parker couldn’t care less about them!

Of all the scouting reports I’ve read about Parker, his mental toughness and tenacity seem to be common traits scouts love about him.   Does he get that from you?  Absolutely not.  If scouts report that he’s stubborn and hard-headed, that part is all me.

Troy’s Sweet Shop in Hereford was my all time favorite donut shop.  That’s not a question, just letting you know.  Good to know—wish it was still here.

As a mother, how do you handle the inevitable hecklers that come to games?  Or has that been an issue yet?  It has been an issue since Jr. High and I have a great solution.  I have a playlist on my iPhone that I turn way up loud and I listen to it the entire time he’s in  the game.  It may look like I’m listening to a play-by-play announcer (sorry Tom Simons), but that couldn’t be further from the truth.  It works great!

If and when Parker makes it to Baltimore, should I plan on joining you all in a luxury suite at Camden Yards for a game?  Not trying to put you on the spot, just want to get this answer in writing if it’s a “yes.”  Well…

Can Parker request a trade to the Rangers or Royals?  That would be much more convenient for me.  That way I could see him when he reaches AA ball (the Royals AA team is here in NW Arkansas- and the Rangers AA team comes through).  Or is that sort of request frowned upon?  I don’t really know how that works.  If he got traded, how would I see more of the country?

Do you still make Parker do chores around the house when he’s home for the Holidays?  Does he use the excuse that he can't risk his pitching arm doing chores?  Because I would if I were him. Yes, I make him do chores when he’s home…I’m attaching a pic of him doing the dishes a couple of days ago.  He was real happy with me.  I don’t listen to his excuses.  :) 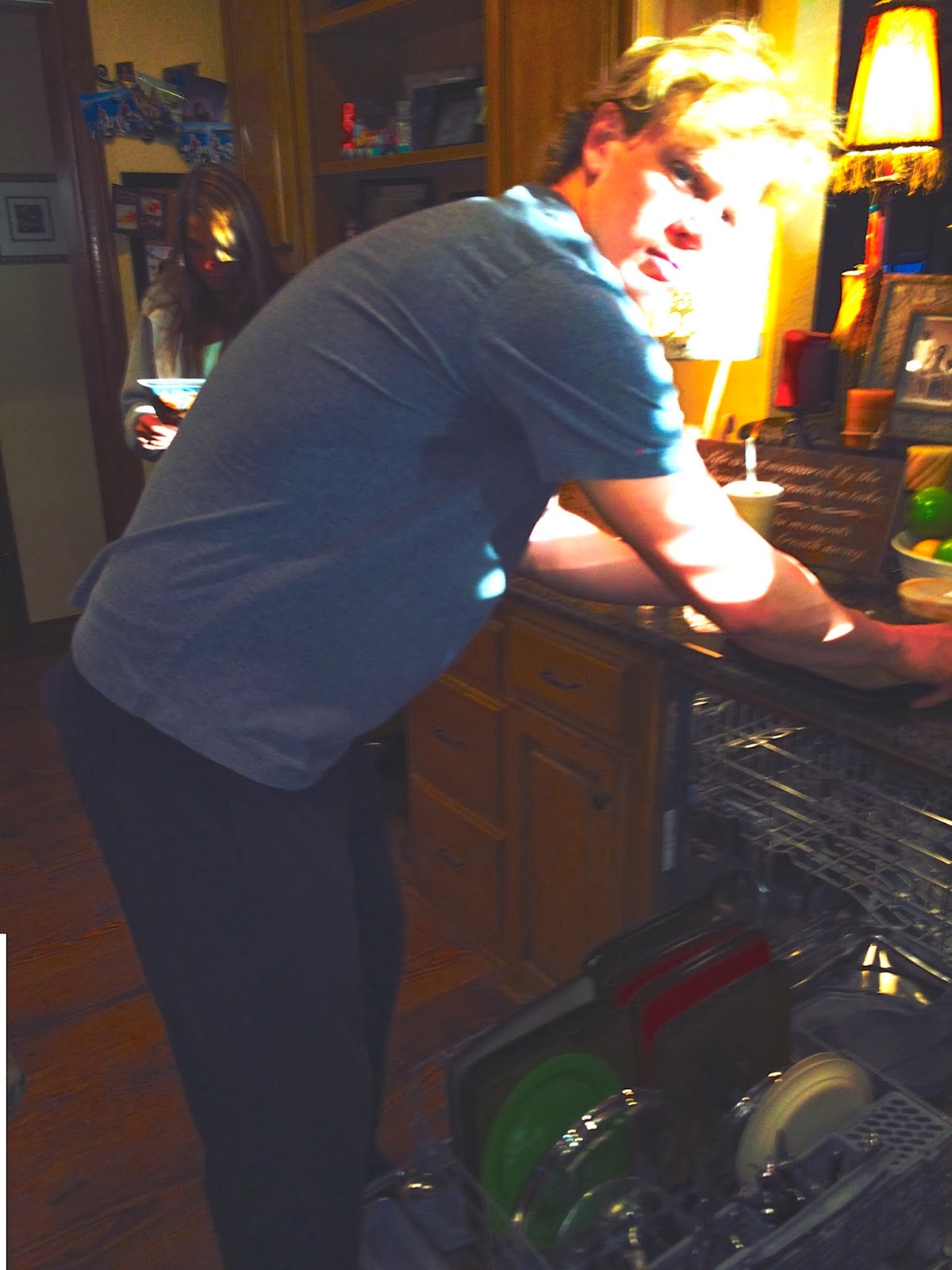 Thank you so much for doing this Becky!   And to top it off, Becky was gracious enough to have Parker autograph a couple of cards I sent her AND agreed, after much cajoling from me, to autograph them herself as well!

SO.... I'm keeping one of these dual autographed cards with my growing Parker Bridwell collection, but I'm also giving one away to my followers!  Yep, a card autographed by Parker AND Becky!  She didn't think anyone would want that, but as a collector, I know this is exactly the kind of unique thing we'd all love to have in our collections. 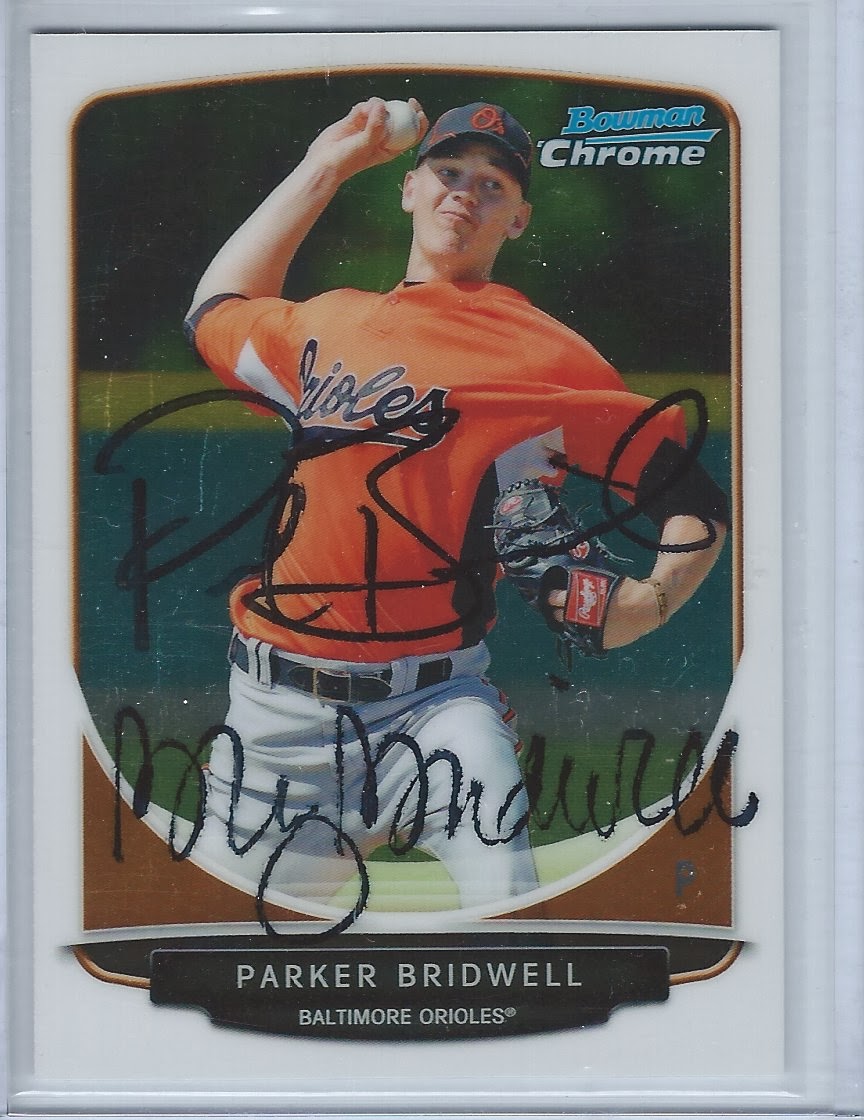 To win the card, simply be a follower and leave a comment on this post.  I'll draw names this Friday and announce the winner.  Best of luck this year Parker! And many, many, many thanks to Becky for being such a great sport, and obviously a great Mom!

Nice Q and A.. I'll keep an eye on him when the Baltimore AAA team visits Rochester.

This was awesome! Well done. Definitely in.

That was really nice of her to take the time out and give you the parent's side of a potential MLB player.

How cool would it be to collector your son (or daughter's) trading cards? That would take player pc's to the next level. Great interview.

That's awesome! Pretty interesting to see a side of the baseball life that most of us never get to see.

Really enjoyed this Q&A! Would love to win that card as Becky has been a close friend forever and I remember when Parker was born! I'm in Michigan now but don't miss a chance to keep up with 'our Parker'. Thanks for interviewing Becky. She's an awesome Mom!

You might have a future giving interviews! Great Questions!

You might have a future giving interviews! Great Questions!

Great read! Definitely a favorite of the forced suite comment and the request to be traded to the Rabgers. Hahaha!

A great interview - nice to hear from a different perspective. I wish my parents would have had the problem of hearing other folks talk about me "throwing to hard"...they never had to worry about bringing ear phones...

Great interview! It's awesome to put a face and back story on some players I've never heard of. I'll be watching for his cards in the future.