My Greatest TTM Auto Ever...

As you may know, I've made it a mission to get George Will on an Allen and Ginter card. Aside from some pub from the magnificent Lost Collector, I've not had a lot of traction.  My facebook page dedicated to this project has been met with the chirping of crickets.  Hell, I'm not even making any friends with my Napkin Doon profile page (cue violins).   However, today in the mail I received something that has renewed my enthusiasm for the project.

A few weeks ago, I sent a note to Mr. Will, expressing my appreciation for his work, and to let him know what I was up to regarding the Allen and Ginter project.  I didn't really expect him to a) read my letter or, b) care, but I thought I might take a shot and at least try to get an autograph.  Today in the mail I received this and was just slightly disappointed: 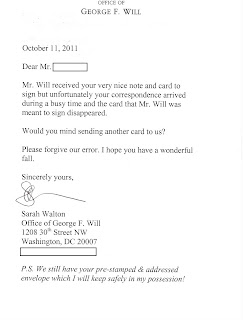 So, at least I knew my card (a 2010 blank Topps "You Sketch It" card that I had absolutely no use for) had almost made it, and would have been autographed had bad luck not intervened.  I was already deciding what other card I could send for an auto, as I kept digging through the day's mail and found the SASE that Ms. Walton referred to above.  Huh?  I opened the letter and found this note: 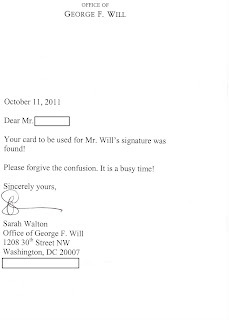 More importantly, this was tucked away in the note: 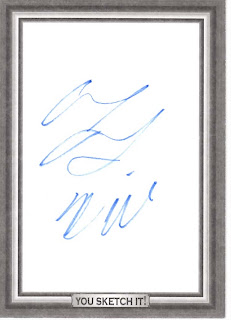 Yes, what we have here is a genuine autograph from my hero of all heroes, George F (as in F'n) Will.  I didn't realize until I got this back how lame the "You Sketch It" caption looked for this purpose, but I'll still treasure this card forever.  I wonder if he did read my letter and thought I was a total lunatic.  I did have the sense to use my real name and not Napkin Doon.
Posted by Napkin Doon at 9:55 PM
Email ThisBlogThis!Share to TwitterShare to FacebookShare to Pinterest
Labels: Facebook, George Will

Congrats on the completed mission!